Our team includes electric vehicle experts from across the state of Washington totaling decades of experience with electric vehicles, charging infrastructure, policy, energy, outreach and education.

Our team includes electric vehicle experts from across the state of Washington totaling decades of experience with electric vehicles, charging infrastructure, policy, energy, outreach and education.

Chad and his wife have been driving plug-in vehicles since 2008. He is a past President of Plug In America and an active member of the Seattle Electric Vehicle Association. He has studied consumer and automaker approaches to the market, vehicle lifecycle costs and the effectiveness of various methods to increase PEV sales.

Matthew Metz became involved with electric vehicles when he purchased his first electric car in 2013 and began wondering why his friends weren’t also making the switch. He is founder of Coltura, an organization which works to improve climate, health, and equity by accelerating the switch from gasoline vehicles to clean, zero-emission alternatives. Prior to founding Coltura, Metz founded the Metz Law Group, Jaguar Forest Coffee Company, the Central Area Development Association, and the Central Area Arts Council. He also worked in international development for an NGO in Mexico City. Metz is a graduate of the University of Chicago and UCLA Law School, and is the author of the citizenmetz blog, a blog focusing on the intersection of carbon and culture.

Steven Lough has been a leader in local efforts to popularize Electric Vehicles since 1980. He joined the Seattle Electric Vehicle Association in 1981 and was their President until 2013. SEVA is the second largest Electric Auto Association chapter in the U.S. largely due to his efforts to Educate, Demonstrate, and Proliferate EV’s of all types and kinds. It has been his life’s work. His work has given him recognition from three of the last five Mayors of Seattle, and a Lifetime Achievement award from the National Electric Auto Association. 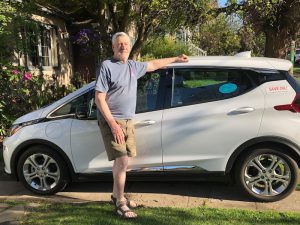 Andrea Tousignant represents Ions for EVs, a consulting firm whose mission is to provide multi-level solutions in response to a need to develop an accessible and equitable EV charging infrastructure. Andrea also provides consulting work for state agencies, and her combination of experience with non-profit management, organization, development, board political advocacy and parks and open space allows her to offer expertise in communication and collaboration as part of public outreach campaigns, increasing the DEWA diversity and influence in the state.

Many thanks to our retired Board President, Ron Johnston-Rodriguez for his many years of dedication!

Ron organized a broad-based coalition to advance the prospects for transportation electrification in rural and urban regions of Washington in 2005. Activities included educating municipal, state, and business leaders about the emergence of highway-capable EVs and EV readiness; vehicle conversions (ICEs into PHEVs) for a dozen fleets to participate in a EV research project with US DOE / Idaho National Lab; producing the first transportation electrification conferences in the Northwest (Power-Up Summits); and assisting the legislature in development of the first RCWs to support vehicle electrification efforts in Washington.

In 2011 he founded Plug-In North Central Washington to develop and promote vehicle electrification and EV tourism for that 3-county region and led the organization’s launch of the USA’s first ‘Electric-Vehicle Friendly’ National Scenic Byway (Stevens Pass Greenway) and electrification of Washington’s 440+ mile Cascade Loop Scenic Drive (2014) – earning its distinction as the longest EV-friendly scenic drive in the USA.